On a beautiful day in the Mushroom Kingdom Princess Peach decides to go out for a stroll in the sunshine, As Peach happily skips along little does she know that Bowser accompanied by several legions of his army have just launched a huge assault on the castle.

Very quickly Bowser and his army were able to overwhelm the castle guards and even captured Mario, Luigi and Toad with the help of their newfound weapon called the Vibe Scepter. When Peach returns she is immediately snapped out of her happy relaxed state and quickly bought back to reality when she sees her Guards running around the castle in a complete state of pandemonium; some of them laughing, some weeping bitterly and some extremely angry. Mario, Luigi and Toad are nowhere to be seen as Bowser has already made them his prisoners. After a brief moment to gather her thoughts the Princess decides that she will take off looking for Bowser and rescue Mario, Luigi and Toad herself seeing as they've helped her out on so many occasions.

Toadsworth handed her an umbrella as she left, he didn't elaborate any further than to say that this was no ordinary umbrella. As the story progresses Princess Peach discovers that the umbrella is named Perry and has his own story to tell... As peach travels throughout the lands of Vibe Island, Perry proves to be a very valuable ally. 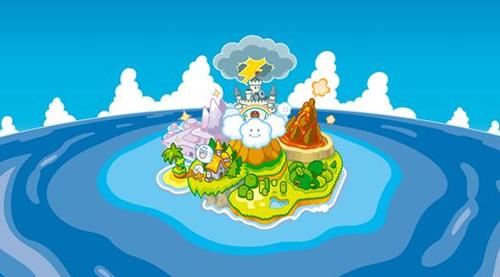 In Super Princess Peach as you play the game you are able to trigger one of four "Vibe" abilities. In order to activate a vibe, Peach needs to first have enough energy in the Vibe Gauge (top left of the Nintendo DS screen just beneath the health meter). There are four different coloured hearts each representing the vibes.

A television commercial for Super Princess Peach on the Nintendo DS